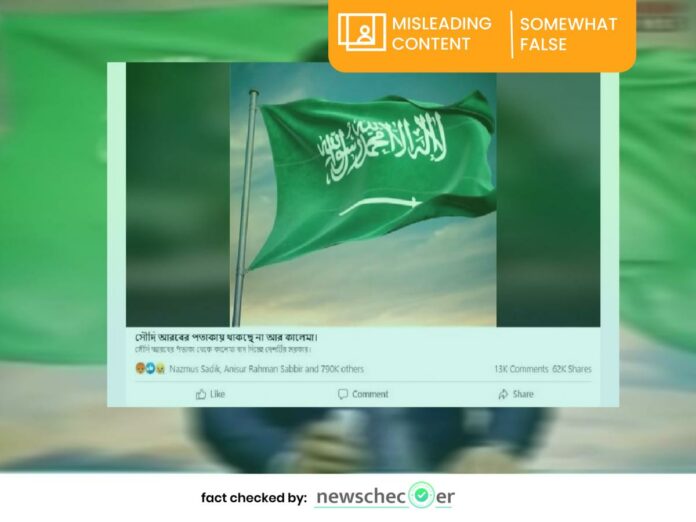 A viral social media post claiming that Saudi Arabia is changing its national flag and the national anthem is being widely shared on Facebook, and Tiktok in the past one week. The post claims that the change has been brought in as a part of the implementation of Prince Mohammed bin Salman’s Vision 2030, and that the Kalema from the flag, the national anthem and the symbol of the country will be changed. The viral posts on social media claimed that a draft proposal to change the Saudi national flag and the national anthem was approved by the Saudi Shura Council.

The same claims were also published by different news and media portals.

Pakistani journalist Imran Khan also made the same claim in a video blog on his own YouTube channel. A key-frame search of the Ttiktok video lead us to a Facebook video making the same claim that Saudi Arabia was going to change its flag as well as the national anthem. Facebook page of the online TV channel Darbin News uploaded a video on February 5 which has been viewed 6.5 million times.

On further research, we found a report published in the Gulf News, which reported that Saudi Arabia’s Shura Council confirmed that there has been no change in the national flag or the national anthem. According to the report, Shura member Saad Al Otaibi, who tabled the draft, said the amendment aims to protect the flag and the national anthem from “harming, tampering and changes”.

In an interview with Arab News, Maj. Gen. Ali M. Al-Asiri, head of the Council’s Security and Military Committee, said the proposed amendment would allow the draft to change policies regarding the use of the country’s flag, emblem and national anthem.

According to a report broadcast on Jamuna TV on February 5, the Saudi Shura Council has adopted a new draft amendment on the use of the national flag which was not there before, ie., those who violated the flag would be jailed for one year and fined three thousand riyals. In addition, rules for flag hoisting have been laid down in non-governmental organizations.

However, no changes have been made to Saudi Arabia’s national flag, and the national anthem, according to the country’s Shura Council.

The national flag of Saudi Arabia was adopted in 1973. It featured a plain green field with the Arabic shahada motto written in white colour and a white straight sword pointed to the left.  The text means, ‘There is no God but Allah, Muhammad is the messenger of God.’

Facebook
Twitter
WhatsApp
Linkedin
Previous article
Viral Image Claiming To Show 5-Year Old Who Died After Falling Into A Well In Morocco Is From U.S
Next article
No, the Lake Natron does not turn live animals into stones