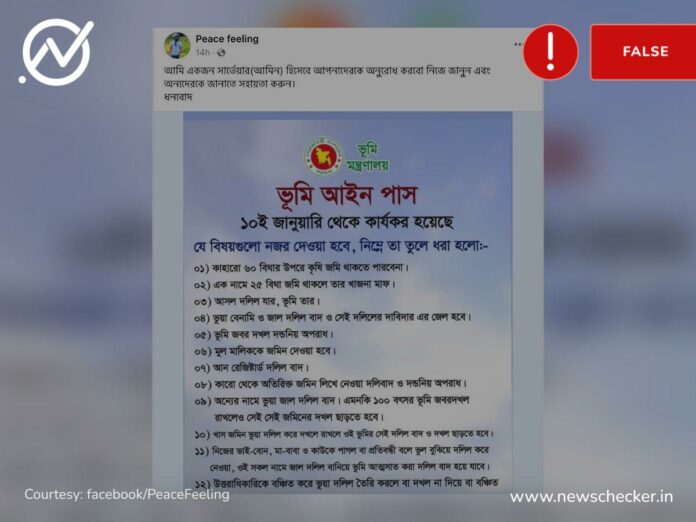 Recently, a social media viral post claimed that the Land Act had been passed, and it has come into effect from January 10 this year and is being circulated on Facebook with 13 points.

See some of the posts published here, here, and here.

Newschecker verified the claim as false.

With the key-word “land new law” in Bangla (ভূমি নতুন আইন ) on a google search, we found a cautionary public notice published on January 22, 2018, which can be found on the official Facebook page of the Ministry of Lands, Bangladesh.

The public notice mentioned, ‘A fake news/rumor has recently spread on various social media and internet that the Land Act has been passed, effective from 10th January, which came to our attention during the regular news review of the Ministry of Lands. This kind of fake news and rumors are creating public impact and confusion – which is undesirable and no law called ‘Land Act’ has been enacted in the National Parliament”.

Read More: An old image of airplane debris has gone viral as a recent plane crash in Nepal

Moreover, according to the Ministry of Lands, the Law Commission has sent a draft called ‘Land Act, 2022 (Concept Paper, Draft Law and Recommendation)‘ to the government. After verifying the draft, it can be seen that the law commission has prepared the draft land law for the purpose of amending, integrating, and above all modernizing all the direct and indirect laws related to land in Bangladesh.

The viral message on social media claiming that the ‘Land Act has been passed, from 10th January’ is fake.

Facebook
Twitter
WhatsApp
Linkedin
Previous article
An old image of airplane debris has gone viral as a recent plane crash in Nepal
Next article
No, Shirin Sharmin Choudhury has not been elected as the new president of Bangladesh