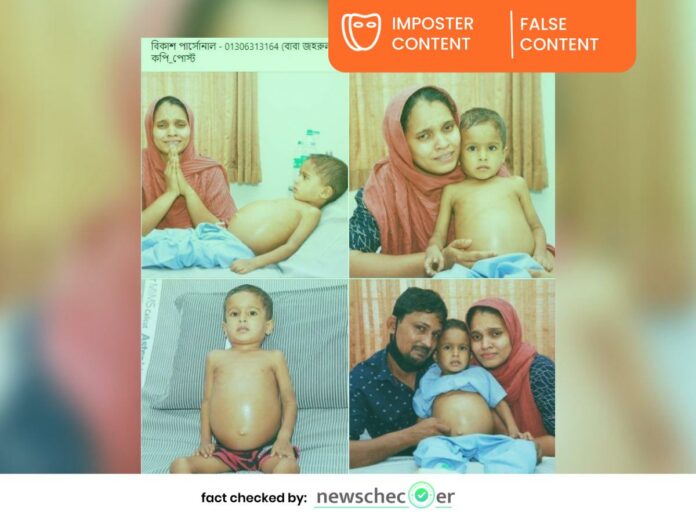 A post to raise funds to help a sick child, allegedly suffering from cancer, is going viral on social media in Bangladesh. Several users shared the post seeking contribution from altruistic friends for the child, identified in the post as  3 year old Md Sabuj. Newschecker has found the post to be incorrect, as the child in the post is from India and not Bangladesh.

The viral post claims that the young boy in the photo is the son of Jahrul Islam ,  an auto driver, belonging to Abaipur Union of Shailkupa sub-district of Jhenaidah district and asks for donations claiming that the family is poor and doesn’t have the money to treat their son. The post goes on to say that the entire treatment will cost 2 Lakh 50 thousand taka and that around 1 lakh taka had already been arranged through relatives.

In order to check the authenticity of the claim, Newschecker conducted a reverse image search of the images in the online post and traced them to Ketto, a crowdfunding platform, titled “Ya Allah! Only Treatment Worth 60 Lakhs Can Save My Son From Cancer. Help”.

The fundraiser on Ketto identifies the child as Master Mohammed Naeem, who suffers from a type of blood cancer called Juvenile Myelomonocytic Leukemia (JMML) . A prescription issued on the letterhead of Aster MIMS, Kozhikode by one Dr. Kesavan M.R has also been provided as a supporting document.

Newschecker tried to contact the number mentioned in the viral post (01306313164) but no one answered. The contact number is said to belong to a person called Bikash or the alleged father of Md Sabuj who the post identifies as Jahrul Islam

We reached out to Dr. Kesavan MR at Aster MIMS Hospital who confirmed to Newschecker that the patient, Master Md Naeem, is genuinely unwell and suffers from JMML. He said “the patient is a Keralite and has been under my care for the last four or five months. He has undergone 5 to 6 rounds of chemotherapy already and we hope to begin the transplant (bone marrow) next month.”

However, it could not be ascertained whether any child in Bangladesh going by name Md Sabuj was sick or in need of financial help.

Facebook
Twitter
WhatsApp
Linkedin
Previous article
2030 Will See 2 Eids And Not 3, Viral Claim Is Misleading
Next article
No, cucumber, coconut, or cold water consumed during menstruation don’t cause ‘cervical cancer’ or ‘infertility’