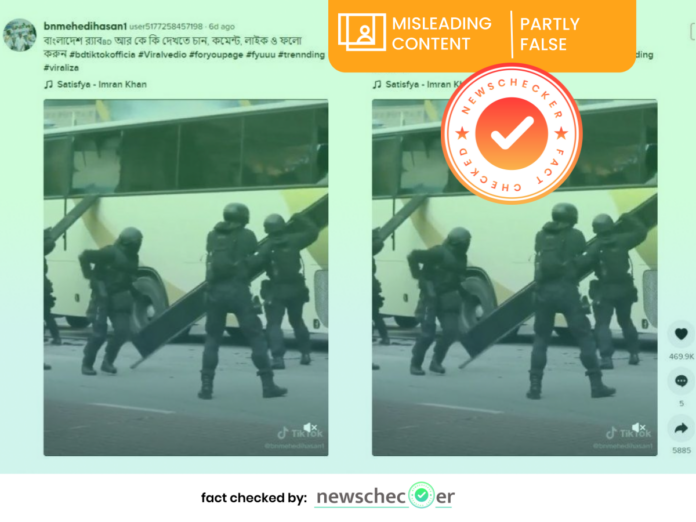 A viral video recently spotted on TikTok showed several armed men wearing helmets and black uniforms breaking the windows of a bus and entering it. The video claims that these are members of an elite unit of Bangladesh Police called the Rapid Action Battalion or RAB.

The video has been viewed about 4.9 million times and liked around 559K. Also, the video was externally shared 7750 times.

The video, which is being claimed to be the RAB, Originally it’s a rehearsal for the Malaysian Army’s Special Forces Regiment (GGK).

In order to assess the authenticity of the claim that the video shows members of the RAB, we broke down the video intro keyframes. On searching specific keyframes of the video using the InVID video tool, we found similar looking videos on YouTube channels uploaded in 2015 and 2017, proving that these videos were not from any recent exercise as was claimed. These videos claimed Malaysian Special Forces and another video claimed that they are a Malaysian SWAT team.

Taking a cue from our findings, we examined the video deeper and found a video uploaded on March 7, 2011, and its description in the Malaysian language “Demonstrasi GGK pada Hari Ulang Tahun ke-78 Tentera Darat Malaysia”. A quick translation of the description showed that it was from the ‘‘78th Anniversary of the Malaysian Army”.

We further examined more visual elements in the video one by one.

In addition to the black uniforms members in the video, some members sporting a different uniform can be seen  amidst the spectators

On matching the uniform on stock photo website and Wikimedia, Newschecker found it to be the uniform of Malaysian Army

Also during the exercise, a-109 model low observation helicopter was spotted.

Images of a similar helicopter was found a defence blog site confirming it to be  that of the Malaysian Army.

The viral video shows it’s RAB – this claim has been proven misleading in our investigation. According to our investigation, this video is a training exercise of the Special Forces of the Malaysian Army, not of the Elite Force RAB of the Bangladesh Police.

Read More: Can consuming alcohol after getting vaccinated for Covid-19 lead to death?

Facebook
Twitter
WhatsApp
Linkedin
Next article
Can consuming alcohol after getting vaccinated for Covid-19 lead to death?