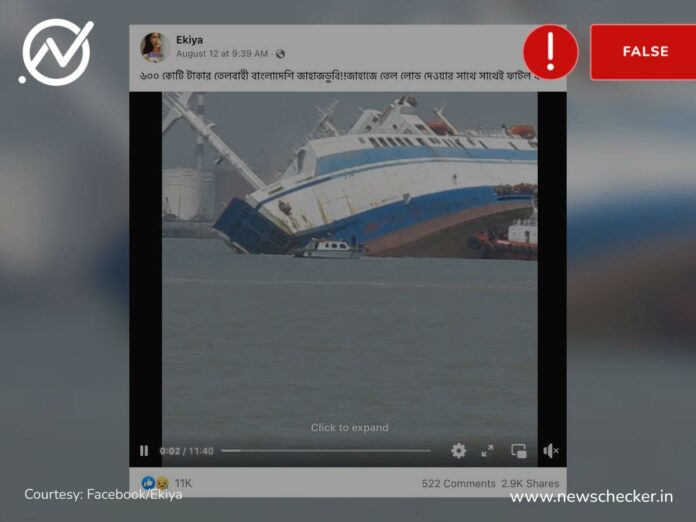 A dramatic video, showing a passenger ferry keeling over while passengers and crew are seen scampering to flee the sinking vessel, is going viral on social media platforms with users claiming that the video is from Bangladesh.

“600 crores Taka Bangladeshi oil ship sinks! The ship burst as soon as it was loaded with oil,” said the caption of the post. Newschecker has found that the video is not from Bangladesh.

In order to check the veracity of the video, Newschecker began by splitting the video into several keyframes. We then conducted a reverse image search on the keyframes and found a longer version of the video published on November 17, 2015, titled “DETIK DETIK TENGGELAMNYA KMP WIHAN SEJAHTERA” on a YouTube channel named arkindo – arkananta indonesia .

Using this as a clue, we looked up reports of ship capsizes in Indonesia in 2015 and found a report on Detik News, an Indonesian mainstream media outlet. We probed further and found more reports on the incident carrying images and videos that matched the viral video.

According to the report, the ship KM Wihan Sejahtera was carrying 175  passengers when it capsized off the port of Tanjung in East Java on November 16, 2015. Witnesses had felt a jolt before the vessel started to list to starboard, thought to be resulting from a collision which caused a leak and as a consequence cargo shift which may, however, also have been caused by overloading, reports of the incident said.