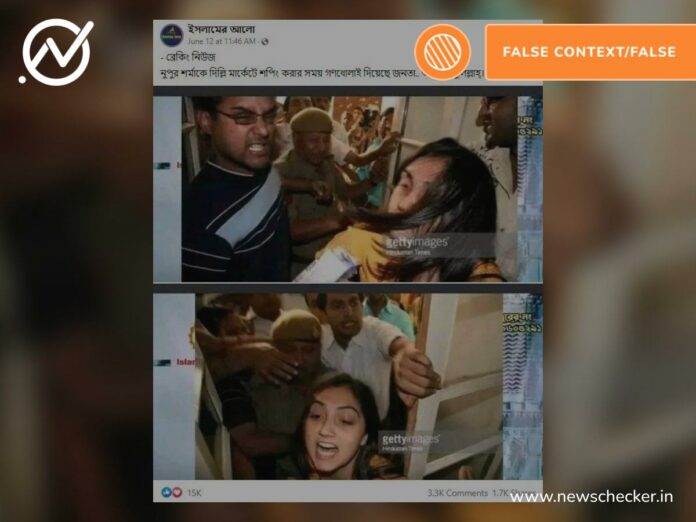 With the controversy surrounding Nupur Sharma’s remarks on Prophet Mohammed (PBUH) yet to die down, two pictures of the suspended BJP leader are now going viral on social media. Users are claiming that Sharma was attacked while she was shopping in a Delhi market. Newschecker has found the claim to be false.

Check out some of those Facebook posts here, here, and here.

The claim is viral in the backdrop of the controversial statement of the now-suspended BJP spokesperson Nupur Sharma in a TV debate show about the  Prophet Muhammad. The matter became a diplomatic nightmare for India with several Arab countries like Saudi Arabia, Qatar, UAE etc, condemning derogatory remarks made by Nupur and registering their protests with the Indian envoy including asking for a public apology.

To verify the authenticity of the claim we conducted a reverse image search on the viral images and found the first photo on the stock image sharing platform Getty Images titled “NEW DELHI, INDIA NOVEMBER 6, 2008: ABVP activist and DUSU President Nupur Sharma crashing the gate to mark her protest against Prof. SAR Geelani at a public meeting at Delhi University’s North Campus, on November 6, 2008, in New Delhi, India.”. The photo was taken by Hindustan Times contributors.

Also, we found the second image on the same website.

On further research, we found a report published on the YouTube channel of Indian news channel Times Now on 10 November 2008 in which it was mentioned that Sharma, then president of the Delhi University Students’ Parliament, was protesting against the invitation of Professor  SAR Gilani to a seminar in Delhi University.

Read More: No, Viral Image Of Blaze Not from Sitakunda Depot Blast

Facebook
Twitter
WhatsApp
Linkedin
Previous article
No, Viral Image Of Blaze Not from Sitakunda Depot Blast
Next article
No, hydrogen peroxide does not cause acid rain