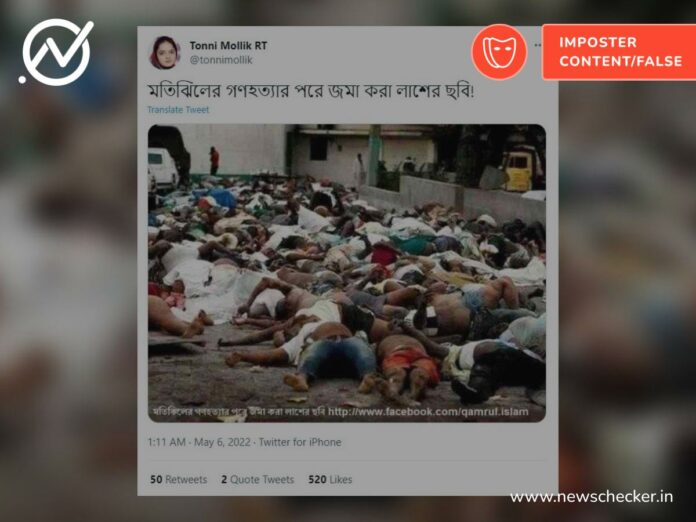 An image showing a large number of human corpses piled together, is being shared widely on social media platform Twitter, with users claiming that the image showed the victims of Motijheel protest.

Check out some tweets here and here.

Twitter user Tonni Mollik RT was among the several users who shared the photo that received about 520 likes and 50 retweets.

What Are The Motijheel Killings?

The Hefazat-e-Islam Bangladesh carried out protests in Motijheel, Dhaka on May 05, 2013, against some bloggers, accusing them of insulting Islam, and demanded the enactment of a blasphemy law, which was met with a crackdown by the authorities. According to authorities, 39 people, including 22 Hefazat workers, were killed in different places in Dhaka during the clashes. The subsequent days saw widespread protests and clashes at different parts of Bangladesh.

To verify the authenticity of the claim, Newschecker conducted a reverse image search on the viral photograph and found the original photo on the stock image sharing platform Getty Images on 14 January 2010 titled “Major Earthquake Devastates Haitian Capital”.

According to the reports, thousands were killed and the country left in shambles after a 7.0 magnitude earthquake struck Haiti on January 12, 2010. The bodies of the deceased were later dug out of the rubble and kept outside the morgue, as seen in the viral photograph.

On further research, we found another image that showed a wider frame of the morgue of Port-au-Prince’s General Hospital on the flicker account of UN Photo. The two images have several matching elements such that have been shown below.

Newschecker also reached out to Joe Raedle, the photographer with Getty images who took the original photographer. The article will be updated with the response, if any.

Read More: Fact Check: Did coronavirus originate from blood cells in the laboratory

A photograph showing dead bodies of people killed in a building collapse in the 2010 Haiti earthquake is being circulated on social media claiming to show bodies of victims of the Motijheel killings.

Facebook
Twitter
WhatsApp
Linkedin
Previous article
Fact Check: Did coronavirus originate from blood cells in the laboratory
Next article
No, This is not Prophet Muhammad’s war Armour