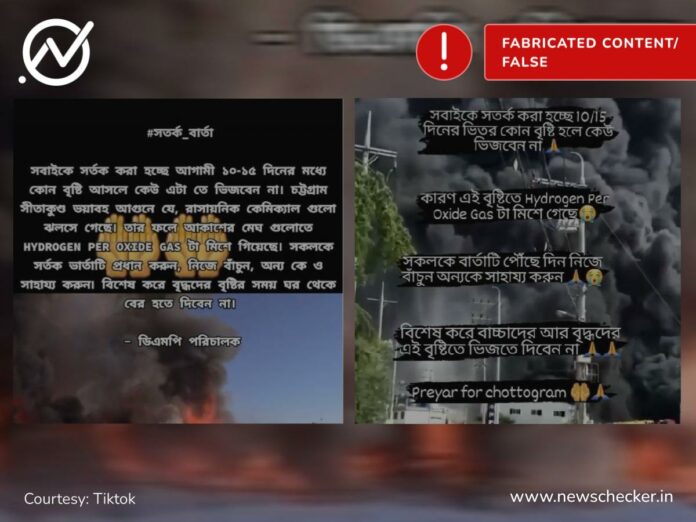 Following the June 4 blast at the BM Container Depot in Sitakunda, Chittagong, that killed 49 people and injured 300 others, a message warning about possible acid rain is being widely shared on social media. Newschecker looked into the claim to analyse if there was a possibility of acid rain due to the blast and found no evidence to back up the viral claim.

What was behind the Sitakunda blast?

The reason for the blast is still unknown. According to a Prothom Alo report, the matter is CID is investigating, and have collected all kinds of samples from burnt ash to factory supplied water as evidence, and looking for the cause of the fire. The report also mentioned that CID is trying to figure out how things started, whether it is an accident or sabotage, they are working with the overall issue in mind.

To find out if the DMP did issue such a warning, Newschecker conducted a keyword search, but found no such report.s Further, Newschecker contacted  DMP’s media and public relations department, who revealed to Newschecker that, “There is no director’s posting in the DMP, and no such instruction has been given by the DMP.”

Newschecker further decided to find out if there was a possibility of acid rain due to the explosion.

Read More: No, Viral Image Of Blaze Not from Sitakunda Depot Blast

According to National Geographic, decaying vegetation and volcanic eruptions emit some chemicals that can cause acid rain, but most acid rain is man-made. When humans burn fossil fuels, sulphur dioxide (SO2) and nitrogen oxides (NOx) are released into the atmosphere. These pollutants react with water, oxygen, and other substances to form airborne sulfuric and nitric acids.

Does hydrogen peroxide cause acid rain?

But what role does it have in causing acid rain? Not much, reveals Chemistry Professor of Dhaka University GM Golzar Hossain. Speaking to Newschecker, Hossain said, “Hydrogen peroxide is basically decomposed to form oxygen, and when decomposed, the oxygen mixes with the air. That is, it has no chance of merging with the clouds. Hydrogen peroxide does not cause acid rain. Even if there is no hydrogen peroxide (blast), there will be acid rain.”

In an interview with NewsBangla, Mohammad Shah Alam, a former director of the Meteorological Department and a meteorologist, said: The colour of rainwater can be seen in red. This acid causes very little damage in the rain. And it is in the industrial area. Even if such acid rain falls in our country, it will not be due to the hydrogen peroxide in the Sitakunda container. That is a misconception.”

Newschecker investigation has found that the recent Hydrogen peroxide explosion in Sitakunda cannot cause acid rain, and the claim of DMP director warning of acid rain is false.

The National Institute for Occupational Safety and Health (NIOSH) post about the chemical by U.S. Department of Health & Human Services

Educational Video by the National Geography