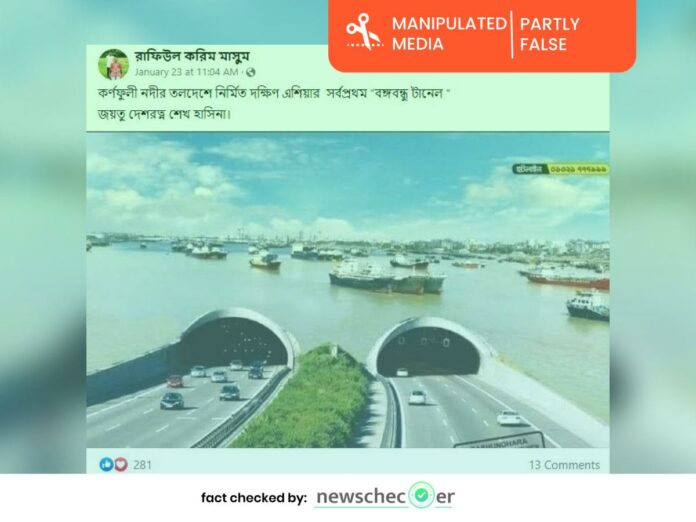 Several social media users in Bangladesh are sharing a photo of an underwater tunnel claiming to show the “first underwater expressway tunnel in south asia, Bangabandhu tunnel, built under the Karnafuli River in Chittagong”. The image shows Some cars are moving through a tunnel and there are ships in the river above the tunnel.

The photo was uploaded on 23 January and has received 2.2K reactions and 34 shares. Newschecker has verified that this picture of the Bangabandhu Tunnel has been edited.

The 9.3-kilometre Bangabandhu Sheikh Mujibur Rahman Tunnel is an under construction underwater expressway tunnel in the port city of Chattogram, Bangladesh under the Karnaphuli river.

According to media reports, the construction of the country’s first tunnel under the Karnafuli River is almost complete. The project is expected to be completed by December 2022, but due to Corona’s obstruction and related issues, it may take another six months to complete.

To authenticate the viral image that was being shared on social media, Newschecker began by conducting a reverse image search of the photo.

On further research, Newschecker also found the image of the river that was used on the viral photo on the travel-based website Trip.com, under the album titled ‘Karnaphuli River.

Manipulated image of Karnafuli river and German tunnel has been shared on Facebook as the picture of the under-construction Bangabandhu tunnel.

Read More: Video of the US Congress hearing on Bangladesh is 8 years old

Facebook
Twitter
WhatsApp
Linkedin
Previous article
Video of the US Congress hearing on Bangladesh is 8 years old
Next article
Viral Image Claiming To Show 5-Year Old Who Died After Falling Into A Well In Morocco Is From U.S