No, Youtube is not “shutting down” as alleged in viral Tiktok Video 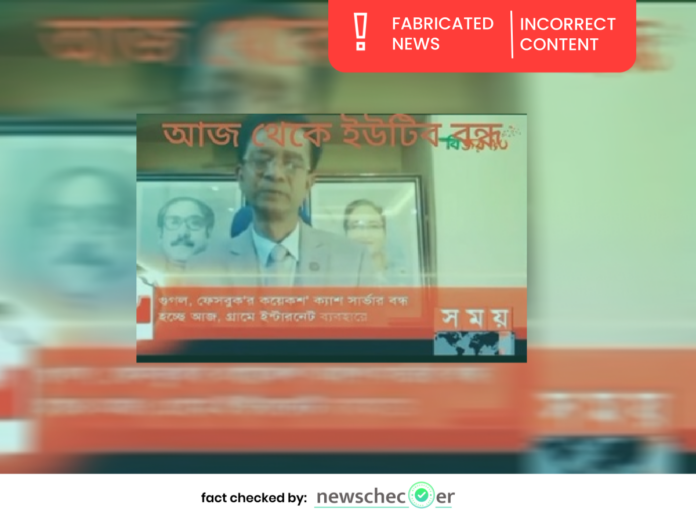 A social media post is doing the rounds on Tiktok claiming that the online video sharing platform Youtube is shutting down from February 23, 2022.

The viral Tiktok video claims that Youtube is shutting down “from today”. The video which appears to be a news broadcast shows visuals of computer servers and people working on their computers in an office setting.

The video has already been liked by 27.5 thousand users on the day it was shared externally on other social media platforms 254 times.

In order to find out more about this clip, we conducted a keyword search on Google using the terms in Bangla “Somoy Tv (সময় টিভি),” “Youtube (ইউটিউব),” and “Google, Facebook cache server (গুগল, ফেসবুকের কয়েকশ ক্যাশ সার্ভার)”. This led us to the orginal video clip dated December 31, 2021 published by Somoy TV on their official Youtube channel.

The video appears to be the business news story originally aired on Somoy Tv and carried the caption “Cache servers of various organizations including Google, Facebook and YouTube are being shut down!”.

What is a cache server?

A cache server is a dedicated server that stores web content and other internet content locally. By placing previously requested information in temporary storage, or cache, a cache server both speeds up access to data and reduces demand on an enterprise’s bandwidth.

Sr. System Administrator of M2SYS Technology A. M. Mohiuddin Rajeev told Newschecker, “if any person from anywhere on the earth searches or browses any internet resources, it will cache on the local storage of different Internet Service Provider’s (ISP) or a vendor-specific cache server like Youtube. Next, when anyone in the country or from a geolocation search searches for the same resources the result comes so quickly. The result, like a web page, images, songs, videos or media files come faster than earlier because it comes from the country’s internal network, not from the direct content creator’s place. Cache servers also allow users to access content offline, including ‘Rich media files or other documents.”

Youtube is a Cloud company that give chances to create and upload videos on their own storage. When people browse or watch any video from “youtube.com”, the video is already uploaded and ready to view.

Rajeev further explains that the Cache servers store static data such as images, videos that do not change often and also store Youtube videos on the company’s local cache server located in the same country. He said, “This means if a second person requests to view content on Youtube. it will load faster than the 1st viewer. If there is no local Youtube cache server, the user can still view the content but the speed will be equal to the loading time on the 1st viewer or slower because that time every user of that country requested to view the content from a direct youtube’s server. Which may have a request limit or bandwidth inbound-outbound limit.”

What will happen if cache servers are being shut down?

“If Youtube’s cache servers are down, users can still watch or enjoy any kind of Youtube’s content, but slower than the current speed,” said A. M. Mohiuddin Rajeev while explaining the impacts like buffering problems, higher resolution, and higher internet cost for mobile data (internet) users.

Why has Bangladesh taken this step?

The Financial Express reported that the Bangladesh Telecommunication Regulatory Commission (BTRC) has said “global internet companies like Google, Facebook and YouTube have set up ‘private cache servers’ in Bangladesh through local agents without any approval by the government” – and that this could pose a threat to the country’s national security.

On February 1, 2021, BTRC directed internet service providers in the country to remove all illegal and local cache servers and that the local ISPs will have to transfer their cache servers to International Internet Gateway (IEG) and the National Internet Exchange (NIX), mobile operator networks and nationwide ISPs (which provide services across the country) by July 31, 2021. Later, the time was extended to December 31, 2021.

It has been widely reported by the media that shutting down cache servers that have not been transferred by the given timeline on Google, Youtube, and Facebook users could lead to slow internet speed. Details are mentioned by BBC News Bangla and Prothom Alo

The citizen charter was last corrected on November 28, 2021, explaining the services provided by BTRC, required documents, financial charges against the service, timeline, and responsible person to communicate.

There is no specific mention of Youtube being inaccessible in the citizen charter and BTRC from February 23.

Somoy TV’s report further states that in order to protect national security, the Bangladesh Telecommunication Regulatory Commission (BTRC) has said that only the specific operator will have permission to cache server, as well as listed cache servers for shutting down, has been given chance to transfer the cache server.

The viral videos claiming Youtube is shutting down are misleading. Newscheckers investigation found that the speed at which the content will load on users’ devices could become slower.