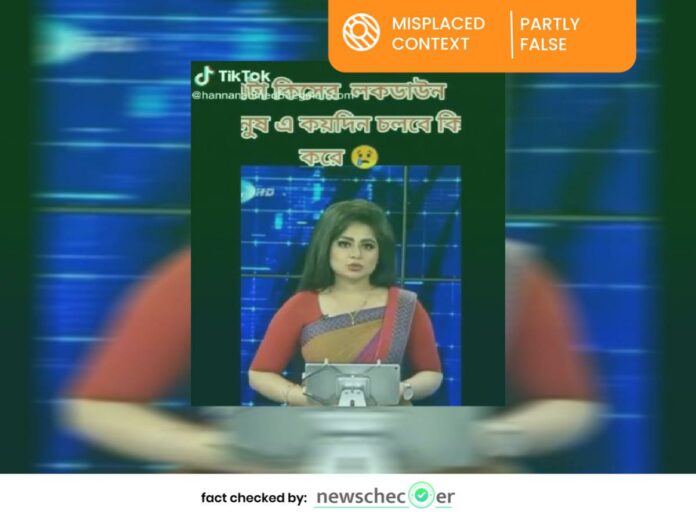 The video claims that the government announced a week-long lockdown across the country from next Monday to bring the coronavirus infection under control and also claimed that the lockdown was likely to increase considering the situation.

A video was shared on Tiktok on December 5th. Where the Tiktok user edited the video and wrote, “What’s this lockdown, how do people last a few days.” The video received over 20,000 likes in one day.

In the video, the anchor can be heard saying, “The government is going to announce a week-long lockdown across the country from next Monday to control the coronavirus infection. Minister for Road Transport and Bridges Obaidul Quader said this in a virtual briefing from his residence in the morning.”

On conducting a reverse image search using the key-frame of the video, Newschecker found that the video was a part of a news broadcast on RTV News on April 3 this year. The Youtube video titled “7-day lockdown across the country from Monday, duration may increase considering the situation”. The Tiktok video was uploaded with the first 13 seconds from the Youtube video.

During the last week of November, the World Health Organization (WHO) designated the new variant B.1.1.529, named Omicron, a variant of concern. Various measures have been taken to prevent the transmission of this new variant in Bangladesh. It is in this context that the old video has resurfaced.

Omicron: How dangerous is the new variant of the coronavirus and what do we know?

This is not the first such instance. In March of this year, a similar video of March 23, 2020, where the government had declared a nationwide lockdown, went viral on social media.

The government has not taken any decision on a week-long lockdown or public holiday across the country from next Monday in view of the new Omicron variant. Old videos have resurfaced with misleading claims.

Facebook
Twitter
WhatsApp
Linkedin
Previous article
Explainer on Omicron: How dangerous is the new variant of the coronavirus and what do we know?
Next article
Image Of Placard From Students Protest Edited And Shared With False Claim