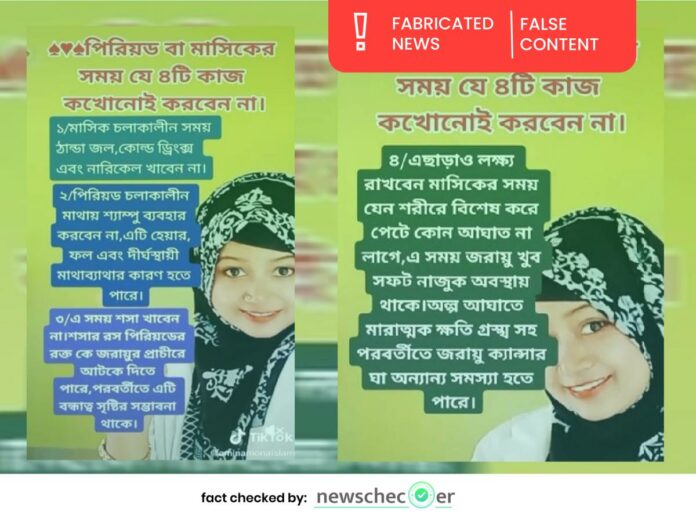 Recently a viral Tiktok post claimed that consuming cucumber, drinking coconut or cold water during menstruation or injury to the lower abdomen will cause ‘cervical cancer’ or ‘infertility.’

In the video, a female physician advises women to practice certain restraints during menstruation. “to prevent infertility and cervical cancer”. The video had been shared 23.5 thousand times and like by 117.7 thousand till January 24, 2022.

Newschecker has found that experts say none of the claims are true.

Multiple claims made in viral video related to Menstruation

In the viral video on Tiktok, we can see a woman, who claims to be a Physician doctor, she is wearing an apron in the video titled “ 4 things you should not be doing during the period.”

She goes on to advise women to follow 4 specific restrictions during their menstruation.

Her suggestions include refraining from drinking cold water, cold drinks or coconut water during menstruation. She further says that those women who are on their period should not use shampoo to wash hair as “it can cause hair fall and chronic headaches”.

Further in the video, another claim is made that cucumber juice can lock the menstruation blood into the uterine wall which could cause infertility. The video ends with another note of caution, urging women to ensure that there is no injury to the body, especially the lower abdomen during menstruation “as the uterus remains very soft during the period” and that synch injuries could lead to  “cervical cancer or sores”

To ascertain the truth behind the claims made by the woman in the video, Newschecker interviewed a Gynaecological Oncologist to understand them better.

Professor Dr Rokeya Anwar, Head of the Gynaecological Oncology Department of National Institute of Cancer Research & Hospital (NICRH) told Newschecker that the above claims have nothing to do with cervical cancer and infertility. There is also no scientific basis for that.

“Eating cucumber, drinking coconut or cold water has nothing to do with menstruation, and there are no restrictions on this food or drink during that time. There is no scientific evidence that this food has to do with cancer or infertility,” said Dr Rokeya Anwar.

“Primary dysmenorrhea that includes headache, lower abdominal pain occurs during or before menstruation – which depends on hormones or diet. There is also no scientific evidence to claim that shampooing the hair during menstruation causes chronic headaches,” added Dr Rokeya.

According to the World Health Organization (WHO), cervical cancer is the fourth most common cancer among women globally and Human papillomavirus (HPV) is responsible for nearly 50% of high-grade cervical pre-cancers, and HPV is mainly transmitted through sexual contact and most people are infected with HPV shortly after the onset of sexual activity.

Dr Rokeya Anwar said that cancer in the cervix is related to sexually transmitted diseases. “Now, it is possible to diagnose HPV through a test and catch it early. this cancer can be fully cured if diagnosed timely,” said Dr Rokeya. She also added that having frequent children, having more than one sexual partner, and other sexually transmitted diseases can cause cervical cancer. Therefore, if anyone has a foul smell, bleeding during intercourse, genital sores, or prolonged infection in the uterus, they should immediately consult a gynaecologist.

Explainer on Omicron: How dangerous is the new variant of the coronavirus and what do we know?

Dr Rezaul Karim Kajal, Associate Professor of obstetrics and gynaecology department of Bangabandhu Sheikh Mujib Medical University (BSMMU), wrote in an article that women in our country are suffering from cervical cancer due to illiteracy, socio-economic conditions and lack of awareness. He further wrote, “Women often hide symptoms of the disease due to demur. If the diagnosis or pre-symptoms of the disease are detected in the early stage, one can be free from cervical cancer with a little treatment.”

Consuming cucumber, drinking coconut or cold water during menstruation or injury to the lower abdomen will not cause ‘cervical cancer’ or ‘infertility’. There is no scientific evidence in these claims.