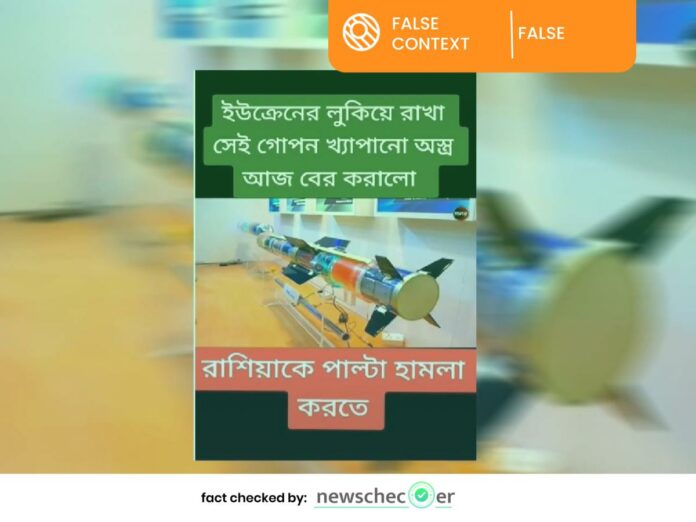 A Tik Tok video claiming to show Ukraine’s ‘hidden ammunition’ that it plans to use in countering the Russian advances in the country, is going viral on the video-sharing platform. First half of the video shows a photograph of Ukrainian President Volodymyr Zelensky in formal attire, and it goes on to show a photograph of a missile.

The content has received over liked 33 thousand likes and has been watched over 387 thousand times.

To verify the claim, we conducted a key-frame search of the image used in the video, and found a photo report in a blog named Livefist Defence that was published on 8 February 2014 which matched with the photograph that was shared in the video. The description of the image says, “NAG ANTI-TANK MISSILE AT BDL STAND”, and the image, has been shared by Indian journalist Shiv Aroor who is also the founder of Livefiest Defence.

The 8th edition of Defexpo India is being organized by the Ministry of Defence, Department of Defence Production, Defence Exhibition Organisation. The exhibition showcases the capabilities of land, naval, internal security and defence system. The biennale exhibition was held at Pragati Maidan, New Delhi from 6 February to 9 February 2014.

No, They were not friends back then

With the keyword “Anti-tank missile Nag” search, we found another article published on 24 March 2016 at a defence industry news and procurement site, Army Technology. There we found that the missile is a third-generation, fire-and-forget, anti-tank guided missile developed by India’s state-owned Defence Research and Development Organisation (DRDO) to support both mechanised infantry and airborne forces of the Indian Army.

The missile is not a secret weapon made by Ukraine, but an Indian anti-tank guided missile “Nag”.

Facebook
Twitter
WhatsApp
Linkedin
Previous article
Were Putin & Zelensky ‘Friends From Before’, Who Turned Enemies? No, Viral Claim Is False
Next article
No, Putin didn’t go underwater during as Russia’s invaded Ukraine