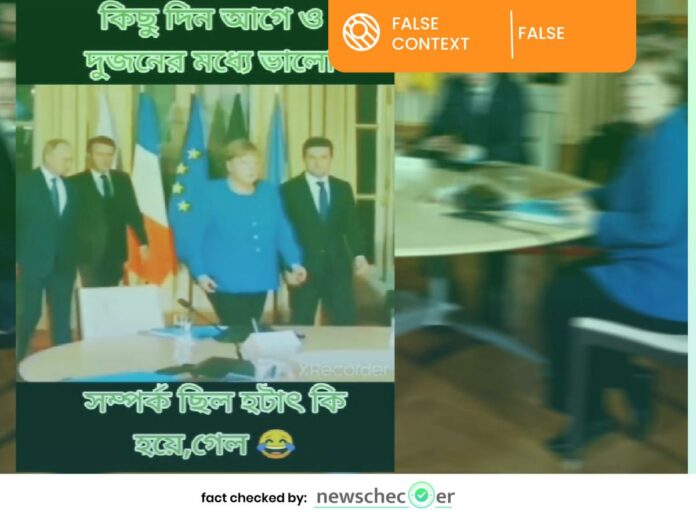 A social media post claiming that Russian President Vladimir Putin and Ukrainian President Volodymyr Zelenksiy were once friends, and are now at war with each other, is going viral on video-sharing platform TikTok.

The video has 16.6k likes and 61 comments at the time of publishing.

Volodymyr Zelenskyy was elected President of Ukraine on April 21, 2019.

During this summit in 2019, it was a critical opportunity for Zelensky to resolve conflict in eastern Ukraine as it was a priority in his presidency. The Paris meeting aimed to get a 2015 peace agreement in Minsk signed by Ukraine and Russia in Minsk, brokered by France and Germany.

A 12-point ceasefire deal was agreed upon by both Ukraine and the Russia-backed separatists in September 2014 which included prisoner exchanges, deliveries of humanitarian aid and the withdrawal of heavy weapons. The provisions were violated by both sides and the agreement broke down shortly.

The meeting is not between friends but the very first meeting of Russian President Vladimir Putin and Ukrainian President Volodymyr Zelenksiy.

Read More: Visuals Claiming To Show The destruction Of World’s Largest Aircraft AN-225 Is Actually From Popular Game GTA 5

Facebook
Twitter
WhatsApp
Linkedin
Previous article
Visuals Claiming To Show The destruction Of World’s Largest Aircraft AN-225 Is Actually  From Popular Game GTA 5
Next article
The missile does not belong to Ukraine, it’s an Indian missile, Nag