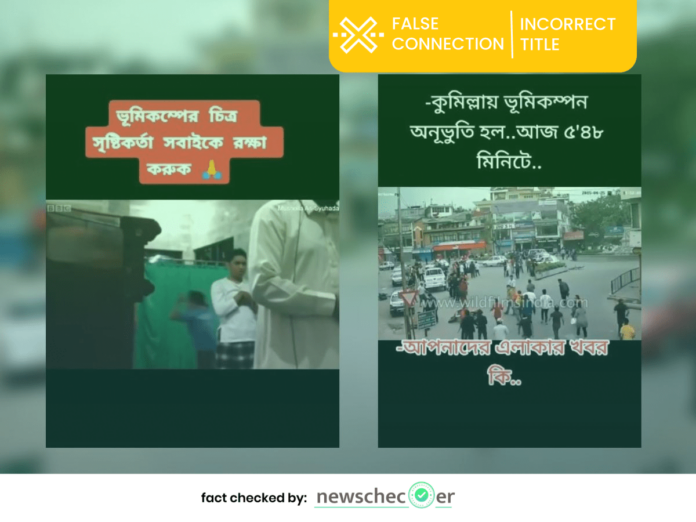 Two videos, claiming to show strong tremors that occured in Bangladesh on November 26,2021 has gone viral on social networking platform TikTok. A fact-check by Newschecker found that the videos are from two different countries and were not of the recent incident.

One of the two videos show a crowded intersection, where people are seen milling in panic after a sudden and elongated tremor, while the other video shows an earthquake shaking a prayer hall while an Imam is heard leading a prayer.

In order to check the veracity of the video, Newschecker began by analysing the keyframes of the video. It was noticed that the video carried a watermark of ‘Wildfilmsindia’ on it. On searching YouTube for the same, we found a similar video with the caption ‘Gorkha Earthquake 2015-Durbar Marg west view, Kathmandu, Nepal’.

The video was uploaded on March 2, 2020, on the YouTube channel of WildfilmsIndia. Newschecker found that WildFilmesIndia’s YouTube channel also has several other CCTV footage of the 2015 earthquake in Nepal.

The traffic post in the video also reads ‘Durbar Marg’.

The video is a CCTV recording of the west view of Durbar marg during the devastating Nepal earthquake of 2015. The USGS measured the quake’s magnitude at 6.8. Also, see the BBC report on this earthquake.

To confirm the source of the second video, Newschecker did a reverse image search of one of the key-frames from the video and found the original video published on BBC News Bangla’s YouTube channel on August 7, 2016.

The same video was also found on the British media The Guardian and the main YouTube channel of BBC News. According to the video description, the video is from the Indonesian island of Lombok, and was shot when a 6.9 magnitude earthquake struck the island in 2018. The quake killed at least 98 people and injured more than 236 others. The Guardian and ABC News published a report on that time.

Facebook
Twitter
WhatsApp
Linkedin
Previous article
Photo Of Prophet Imran’s Grave Falsely Shared As Grave Of Prophet Adam
Next article
Explainer on Omicron: How dangerous is the new variant of the coronavirus and what do we know?