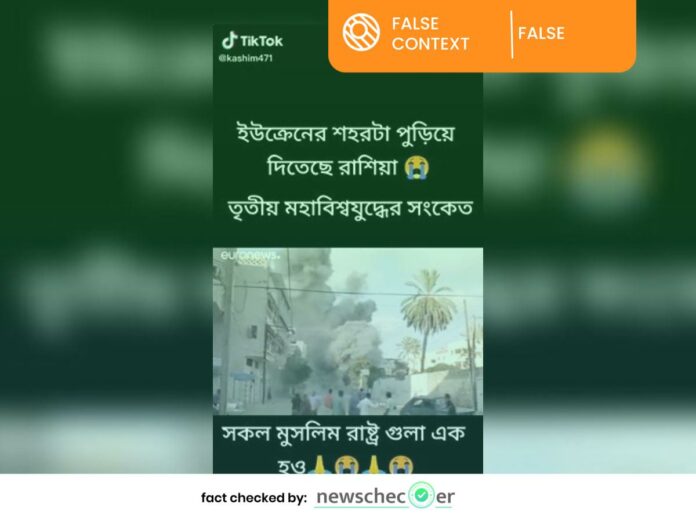 A video of an airstrike recently went viral on TikTok claiming that Russia is burning a city in Ukraine without mentioning the name of any city. Newschecker has found the claim to be false.

The viral video contains visuals of scared locals running around white buildings and palm trees engulfed in plumes of smoke as bombs go off in the area .

Newschecker has found this to be false. The video originally taken in August 2018 shows an Israeli airstrike in the Gaza Strip. Reportedly Israel retaliated by launching air strikes on Gaza, accusing the Hamas of firing rockets.

To verify the authenticity of the claim that the viral video is recent and from Ukraine, we conducted a reverse image search with the keyframes extracted from the video and found a report published on the Turkish-based media outlet HABERLER on August 9, 2018, titled “rasrail’den Gazze’ye Hava Saldırısı” (Israeli Airstrike on Gaza) which showed matching visuals.

On further research, we also found the original video on another Turkish-based media outlet ‘A Haber’ Twitter account.

Newschecker’s investigation has found that the viral video being shared claiming to show bomb blasts in a Ukrainian city is neither recent, nor from Ukraine

A video clip of Israeli airstrikes in the Gaza Strip in 2018 has been shared with claiming that Russia is burning this Ukraine city.

Facebook
Twitter
WhatsApp
Linkedin
Previous article
No, Putin didn’t go underwater during as Russia’s invaded Ukraine
Next article
No, This Girl Did Not Turn Into Fox For Insulting Holy Quran, Viral Video Is False