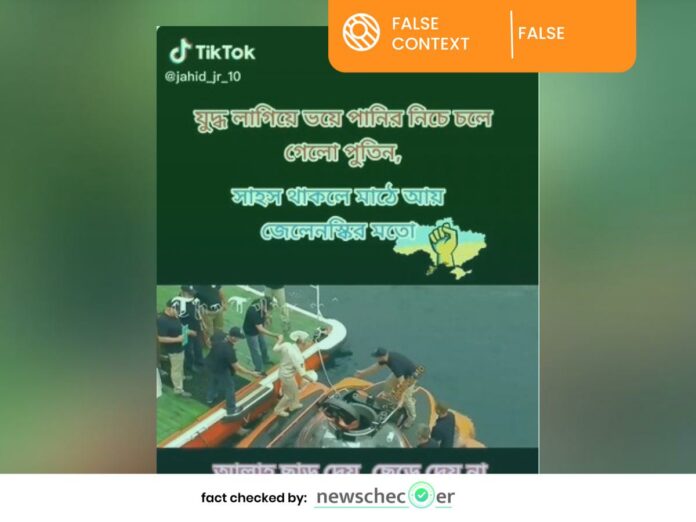 A video of Russian President Vladimir Putin’s submarine voyage recently went viral on TikTok claiming that Putin was hiding underwater in a submarine after the Russian invasion of Ukraine. Newschecker has found the claim to be false.

The viral video content has received over 103k likes and has been watched over 959.9K times at last count.

Originally, Russian President Vladimir Putin visited the wreckage of the ship in the Black Sea in 2015 with Russian researchers in a mini-submarine.

To verify the claim, we conducted a Google search using the keywords “Putin-Submarine” and found the original video on the official Youtube channel of UK based The Telegraph, titled “Russian President Vladimir Putin pays visit to Crimea in a submarine” published on August 19, 2015.

On further research, we found the same video was reported by the BBC on August 17, 2015, titled “Putin in Crimea: Leader dives on Black Sea shipwreck in minisub”.

Read More: The missile does not belong to Ukraine, it’s an Indian missile, Nag

Facebook
Twitter
WhatsApp
Linkedin
Previous article
The missile does not belong to Ukraine, it’s an Indian missile, Nag
Next article
This is not the Video of the Ukraine City Burning