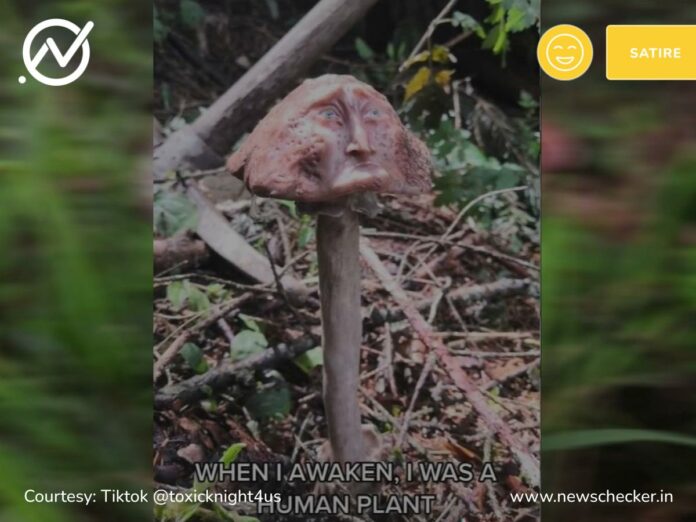 A video claiming to show a human that has transformed into a “talking mushroom” has been shared widely on the video-sharing platform TikTok. Those sharing the video claim it to be “proof” that “talking plants exist”.

On examining the video we found that it shows a first-person account of a mushroom with human-like facial features, growing in the wild.

The ‘ talking mushroom’ is narrating and claims that it led a perfectly ordinary life as a human before it transformed into a mushroom after he ventured to pluck a mysterious plant ignoring warnings. The mushroom can also be heard complaining in the video about its “ugly face” and its inability to eat cereals for breakfast.

The video had been viewed about six and a half million times, with around 11,000 comments at last count and has also garnered 36,000 likes and almost two and a half thousand shares.

We started by conducting a reverse image search on the keyframes of the viral video and found an advertisement on Etsy.com which is an online business platform for handmade crafts and vintage supplies. The same image of the ‘talking mushroom’ as seen in the viral video is also present on Etsy as shown below and is described to be a ‘Sad mushroom sculpture of the magical forest’, priced at USD 154 and mentions that 180 units of the sculpture have already been sold. The website mentions that the product has been sold out.

We explored the Etsy page further and found that the sculpture is sold under the name MyMagicOoakland by a garden sculpture created by artist Elisabetta Visentini. The product is titled “Sad mushroom sculpture of the magical forest, From VASO, OOAK, surrealist figurative art, fantasy creature, fairy garden, toyart, art and nature” indicating that this is not real and a sculpture of a fantasy creature/ surreal art.

In addition to the above claim, the same viral video also carried a photograph of another “mysterious plant” plant with a warning saying “do not touch this plant”. The video claims that if touched, the plant “turns humans into mushrooms upon touching”. To find out more about this plant, we conducted a reverse image search using the keyframes from the viral video. Our investigation revealed that this plant is called Tillandsia Bulbosa air plant or terrarium plant.

Further information about this plant revealed that it is native to Mexico and Central and South America and is a known plant and not mysterious as alleged in the viral video. There are multiple websites that provide details on how to grow and care for this plant.

It is a terrarium plant which is widely used to enhance the beauty of a house and is an indoor plant.

Read More: No, This Girl Did Not Turn Into Fox For Insulting Holy Quran, Viral Video Is False

A satire video showing a garden sculpture of a ‘sad mushroom’ falsely shared as a ‘talking plant.’