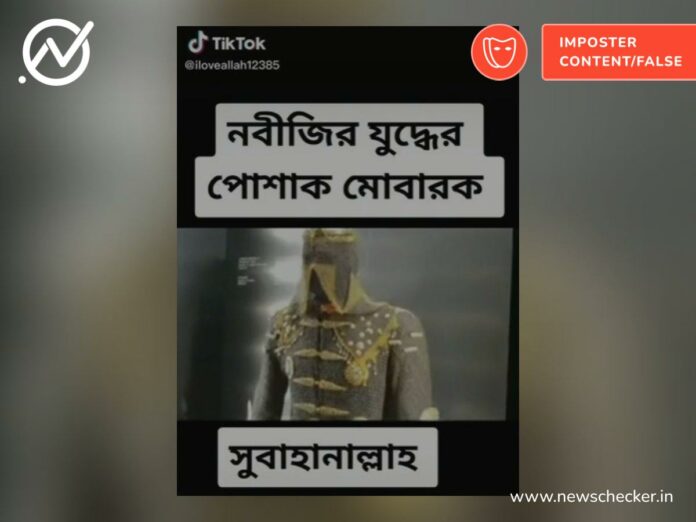 A video showing a chainmail armour, with golden embellishments and a bejewelled sword, on display behind a glass case is being widely shared on video sharing platform TikTok, claiming to show the armour of prophet Muhammad (PBUH). Check out some videos here, here, and here.

Newschecker has found the claim to be false.

To verify the authenticity of the claim we conducted a reverse image search with the keyframes extracted from the video and found a video on a stock video website ‘POND5’ titled “Description: Expensive Ammunition of Turkish Warrior”.

Using this  as a clue, we conducted further research and found a report on Turkish state-run news agency ANADOLU AJANSI on October 30, 2016, with a Turkish caption that translated to “He’s making the war armours he’s seen in the TV series”.

According to the report, Sami Ersin, a 64-year-old Turkish created a replica version of the war armour of the Mustafa III, Sultan of the Ottoman Empire from 1757 to 1774 after being influenced by television series. The costume is currently on display at the Topkapi Museum in Istanbul.

Read More: No, This is not a picture of the Motijheel Victims

On researching further, we spotted another video of the same armour on a YouTube video uploaded by a user who visited the Topkapi museum.