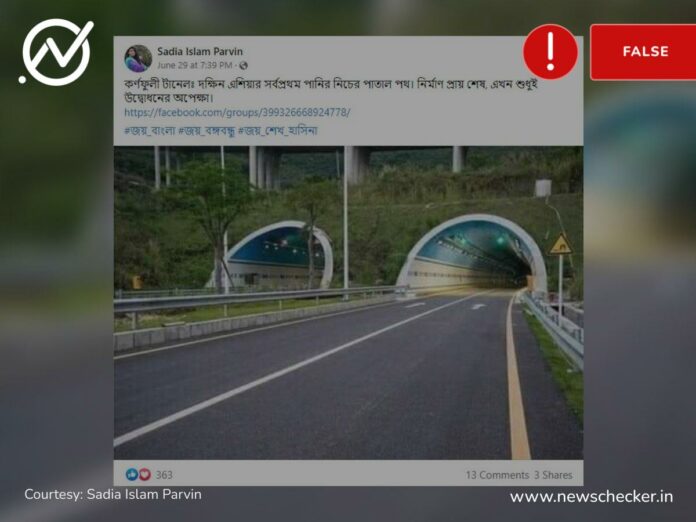 Nearly 87% of the Bangabandhu Tunnel or Karnaphuli tunnel is complete under construction in Chittagong, an image of a tunnel is being widely shared on social media platforms claiming to show the tunnel.

Newschecker has found that the picture does not show the Karnaphuli tunnel.

What is the Karnaphuli tunnel project?

Bangabandhu Sheikh Mujibur Rahman Tunnel or Karnaphuli Tunnel is an under construction underwater expressway tunnel in the port city of Chattogram, Bangladesh under the Karnaphuli river.

Read More: Viral Image Of Dead Child Floating In Flood Waters Is not From Bangladesh

On conducting a reverse image search of the viral image on Google, we found that the image was published on 16 October 2021 on a website called UrbanUpdate with the title “Thane-Borivli twin tunnel project gains ground”.

On further research, we found another report published on 26th May 2017 by a South Korean news outlet, Z publication, carrying the same image. The report, titled “A ‘tunnel entrance’ in our front yard?”, reveals the South Korean government’s decision to build a 1.2 kilometres long tunnel between the country’s Gangwon-Door Sabuk-Myon and Chuncheon-Sir. However, the report credits the source as Getty Images Bank.

On further comparing the viral image with the other images of the Karnaphuli tunnel available, we found no similarity.

Pictures of a different tunnel are being claimed as pictures of the Karnaphuli tunnel on Facebook.