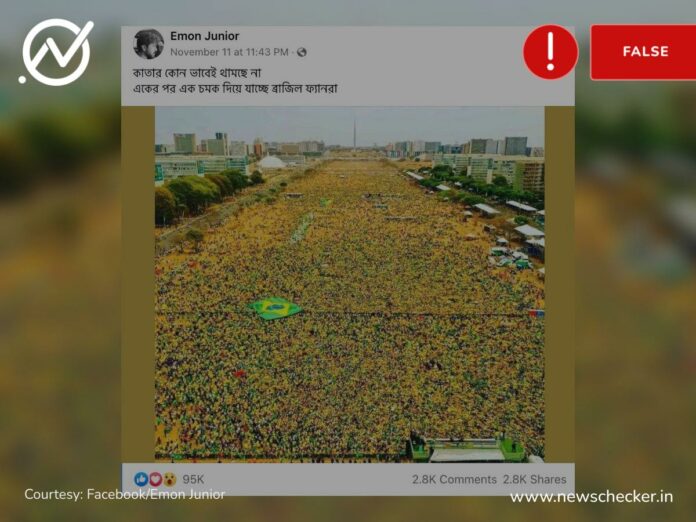 Recently, a viral social media post on Facebook claimed a huge crowd of Brazil supporters has gathered in Qatar supporting the Brazil football team taking part in the FIFA World Cup 2022 in Qatar. The photograph’s caption says, “Qatar is not stopping in any way. Brazil fans are giving surprises one after another”. See some of the posts that have been published here, here and here.

Newschecker fact-checked and verified the claim, and found that the claim is false.

With the reverse image search, the exact same image was found in a report published on 7th September 2022 on the website of Brazilian news media FolhaPE‘.

According to the report, a parade was held on the occasion of Brazil’s Independence Day in the presence of President Jair Bolsonaro at the Esplanada dos Ministérios located in Brazil. The parade took place on 7th September this year.

Read More: No, this is not the Starlink satellite train seen in Kushtia

Later, in a tweet published on the same day on the official Twitter account of Flavio Bolsonaro, the son of current Brazilian President Jair Bolsonaro, tweeted a photo of the same scene from another angle.

Photos of Brazil’s Independence Day parade are being circulated on Facebook, falsely claiming that this is a photo of Brazil fans in the FIFA World Cup Qatar.

Facebook
Twitter
WhatsApp
Linkedin
Previous article
No, this is not the Starlink satellite train seen in Kushtia
Next article
No, The photograph of Argentina Fans are not from this year’s FIFA World Cup in Qatar